Mountains: The ocean ridges form a great mountain range, almost 40,000 miles (64,000 km) long, that weaves its way through all the major oceans. It is the largest single feature on Earth.

48 more facts about our oceans…

1. The oceans occupy nearly 71% of our planet’s surface

2. More than 97% of all of our planet’s water is contained in the ocean

3. The top ten feet of the ocean hold as much heat as our entire atmosphere

4. The average depth of the ocean is more than 2.5 miles

5. The oceans provide 99 percent of the Earth’s living space- the largest space in our universe known to be inhabited by living organisms

6. More than 90% of this habitat exists in the deep sea known as the abyss

7. Less than 10% of this living space has been explored by humans

8. Mount Everest (the highest point on the Earth’s surface 5.49 miles) is more than 1 mile shorter than the Challenger Deep (the deepest point in the ocean at 6.86 miles)

9. The longest continuous mountain chain known to exist in the Universe resides in the ocean at more than 40,000 miles long

10. The Monterey Bay Submarine Canyon is deeper and larger in volume than the Grand Canyon

11. The Antarctic ice sheet that forms and melts over the ocean each year is nearly twice the size of the United States
12. The average temperature of the oceans is 2ºC, about 39ºF

13. Water pressure at the deepest point in the ocean is more than 8 tons per square inch, the equivalent of one person trying to hold 50 jumbo jets.

14. The Gulf Stream off the Atlantic seaboard of the United States flows at a rate nearly 300 times faster than the typical flow of the Amazon River, the world’s largest river

16. The color blue is least absorbed by seawater; the same shade of blue is most absorbed by microscopic plants, called phytoplankton, drifting in seawater

17. A new form of life, based on chemical energy rather than light energy, resides in deep-sea hydrothermal vents along mid-ocean ridges

19. The blue whale, the largest animal on our planet ever (exceeding the size of the greatest dinosaurs) still lives in the ocean; its heart is the size of a Volkswagen

20. The gray whale migrates more than 10,000 miles each year, the longest migration of any mammal

21. The Great Barrier Reef, measuring 1,243 miles, is the largest living structure on Earth. It can be seen from the Moon.

22. More than 90 percent of the trade between countries is carried by ships and about half the communications between nations use underwater cables

23. More oil reaches the oceans each year as a result of leaking automobiles and other non-point sources than the 40 million litres that was spilled in Prince William Sound by the Exxon Valdez. The spill eventually covered 3,400 sq. km of ocean.

24. Fish supply the greatest percentage of the world’s protein consumed by humans

25. Most of the world’s major fisheries are being fished at levels above their maximum sustainable yield; some regions are severely overfished

26. The Grand Banks, the pride of New England fishing for centuries, are closed due to overfishing

27. Eighty per cent of all pollution in seas and oceans comes from land-based activities.

28. Three-quarters of the world’s mega-cities are by the sea.

30. Death and disease caused by polluted coastal waters costs the global economy US$12.8 billion a year. The annual economic impact of hepatitis from tainted seafood alone is US$7.2 billion.

32. Over the past decade, an average of 600,000 barrels of oil a year has been accidentally spilled from ships, the equivalent of 12 disasters the size of the sinking of the oil tanker Prestige in 2002.

33. Tropical coral reefs border the shores of 109 countries, the majority of which are among the worlds least developed. Significant reef degradation has occurred in 93 countries.

34. Although coral reefs comprise less than 0.5 per cent of the ocean floor, it is estimated that more than 90 per cent of marine species are directly or indirectly dependent on them.

35. There are about 4,000 coral reef fish species worldwide, accounting for approximately a quarter of all marine fish species.

36. Nearly 60 per cent of the world’s remaining reefs are at significant risk of being lost in the next three decades.

38. Less than one half a per cent of marine habitats are protected — compared with 11.5 per cent of global land area.

39. The High Seas — areas of the ocean beyond national jurisdiction — cover almost 50 per cent of the Earth’s surface. They are the least protected part of the world.

40. Although there are some treaties that protect ocean-going species such as whales, as well as some fisheries agreements, there are no protected areas in the High Seas.

42. More than 3.5 billion people depend on the ocean for their primary source of food. In 2030, this number could double to 7 billion.

43. Populations of commercially attractive large fish, such as tuna, cod, swordfish and marlin have declined by as much as 90 per cent in the past century.

44. Each year, illegal longline fishing, which involves lines up to 80 miles long, with thousands of baited hooks, kills over 300,000 seabirds, including 100,000 albatrosses.

45. As many as 100 million sharks are killed each year for their meat and fins, which are used for shark fin soup. Hunters typically catch the sharks, de-fin them while alive and throw them back into the ocean where they either drown or bleed to death.

46. Global by-catch — unintended destruction caused by the use of non-selective fishing gear, such as trawl nets, longlines and gillnets — amounts to 20 million tons a year.

47. The annual global by-catch mortality of small whales, dolphins and porpoises alone is estimated to be more than 300,000 individuals.

48. Fishing for wild shrimp represents 2 per cent of global seafood but one-third of total by-catch. The ratio of by-catch from shrimp fishing ranges from 5:1 in temperate zones to 10:1 and more in the tropics.

The total length of the world’s coastlines is about 315,000 miles, enough to circle the Equator 12 times.

As coastal zones become more and more crowded, the quality of coastal water will suffer, the wildlife will be displaced, and the shorelines will erode. 60% of the Pacific and 35% of the Atlantic Coast shoreline are eroding at a rate of a meter every year.

More than half the world’s population live within a 100 km or 60 miles distance from the coast. This is more than 2.7 billion people. Rapid urbanization will lead to more coastal mega-cities containing 10 million or more people. By the end of the millennium 13 out of 15 of the world’s largest cities will be located on or near the coast. Growing population in coastal areas leads to more marine pollution and distribution of coastal habitats. Some 6.5 million tons (6,500,000,000 kilo) of litter finds its way into the sea each year.

(Close to one-half of all Americans live in coastal counties).

The sea provides the biggest source of wild or domestic protein in the world. Each year some 70 to 75 million tons of fish are caught in the ocean. Of this amount around 29 million tons is for human consumption. The global fish production exceeds that of cattle, sheep, poultry or eggs. Fish can be produced in two ways: by capture and by aqua culture. The total production has grown 34% over the last decade.

The largest numbers of fish are located in the Southern Hemisphere due to the fact that these waters are not largely exploited by man.

Fifteen out of seventeen of the world’s largest fisheries are so heavily exploited that the reproduction can’t keep up. With the result that many fish populations are decreasing rapidly.

Species of fish endangered by overfishing are: tuna, salmon, haddock, halibut, and cod.

In the 19th century, codfish weighing up to 200 pounds used to be caught. Nowadays, a 40 pound cod is considered a giant. Reason: overfishing.

The sea level has risen with an average of 4-10 inches (10 to 25 cm) over the past 100 years and scientists expect this rate to increase. Sea levels will continue rising even if the climate has stabilized, because the ocean reacts slowly to changes.

90% of all volcanic activity on Earth occurs in the ocean. The largest known concentration of active volcanoes (approximately 1,133) on the sea floor is located in the South Pacific

Under the enormous pressures of the deep ocean, sea water can reach very high temperatures without boiling. A water temperature of 400 degrees C has been measured at one hydrothermal vent.

The average temperature of all ocean water is about 3.5° C.

Almost all of the deep ocean temperatures are only a little warmer than freezing (39°F).

Antarctica has as much ice as the Atlantic Ocean has water.

10% of the earth’s surface is covered with ice.

The Arctic Ocean is the smallest ocean, holding only one percent of the Earth’s seawater. This is still more than 25 times as much water as all rivers and fresh water lakes.

The average thickness of the Arctic ice sheet is about 9 to 10 feet, although there are some areas as thick as 65 feet.

In the unlikely event that all the polar ice was to melt, the sea level all over the world would rise 500 to 600 feet. As a result, 85 to 90% of the Earth’s surface would be covered with water as compared to the current 71%. The U.S. would be split by the Mississippi Sea, which would connect the Great Lakes with the Gulf of Mexico.

The Arctic produces 10,000 to 50,000 icebergs annually. The amount produced in the Antarctic regions is inestimable. Icebergs normally have a four-year life-span; they begin entering shipping lanes after about three years.

Oceans absorb between 30% and 50% of the carbon dioxide produced by burning fossil fuel. Carbon dioxide is transported downwards by plankton. Any change in the temperature of the ocean water, influences the ability of plankton to take up carbon dioxide. This has consequences for the ecosystem, because plankton forms the base of the food web.

Over 60% of the world’s coral reefs are threatened as a result of pollution, sedimentation and bleaching due to rising water temperatures caused by global warming. Global Coral Monitoring Network (GCRMN) states that currently 27% of all coral reefs worldwide have disappeared and around 2050 only 30% will be left.

In just a single year, three times as much garbage is dumped into the world’s oceans as the weight of fish caught.

Two pints of motor oil can contaminate up to 2 million gallons of drinking water.

If all the gold suspended in the world’s seawater were mined, each person on Earth could have about 9 pounds of gold.

Oil is one of the ocean’s greatest resources. Nearly one-third of the world’s oil comes from offshore fields in our oceans. Areas most popular for oil drilling are the Arabian Gulf, the North Sea, and the Gulf of Mexico.

Oil was also borne from the sea. Millions of years ago, countless marine microscopic plants (phytoplankton) and animals (zooplankton) lived in the ancient seas as they do today. As they died, the skeletal remains of these tiny organisms settled to the sea floor, mixed with mud and silt, and over millions of years, formed organic-rich sedimentary layers. Other sediments continued to be deposited and further buried the oganic-rich sediment layer to depths of thousands of feet, compressing the layers into a rock that would become the source for oil. Over the years, as the depth of the burial increased, pressure increased, along with the temperature. Under such conditions, and over long periods of time, the original skeletal remains of phytoplankton and zooplankton changed, breaking down into simpler substances called hydrocarbons – compounds of hydrogen and carbon. This process still continues, although it will be millions of years before the next batch of oil is done cooking.

Some scientists estimate that the oceans contain as much as 50 quadrillion tons (50 million billion tons=50,000,000,000,000,000) of dissolved solids. If the salt in the ocean could be removed and spread evenly over the Earth’s land surface it would form a layer more than 500 feet (166 m) thick, about the height of a 40-story office building.

The freezing point of sea water depends on its salt content. Typical ocean water has about 35 grams of salt per liter and freezes at -19 degrees C. 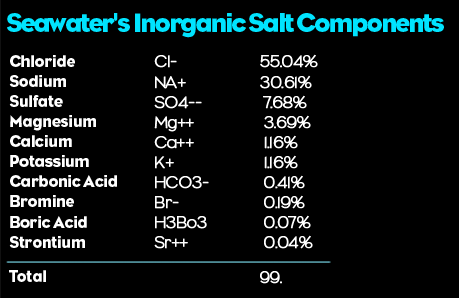 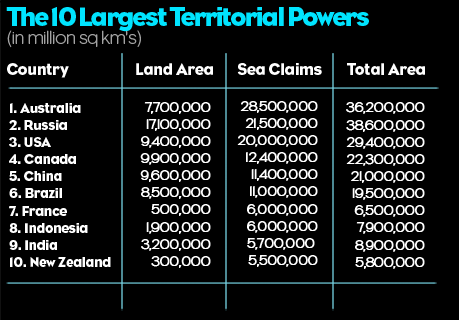